Great news for fans of Professor Iain Stewart’s television programmes as he is back!  The press release for the new series is as follows; ‘following on from Earth: The Power Of The Planet, geologist and presenter Professor Iain Stewart returns to BBC Two to continue the epic story of the relationship between human civilisation and Earth.’ 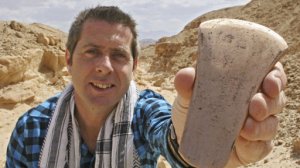 ‘How Earth Made Us explores how geology, geography and climate have influenced and continue to shape human history. Each episode examines a different force, including the effects of deep earth, wind, fire and water. The series concludes with a look at how the human race has become a geological force in its own right.’

‘Travelling to some of the most iconic locations on the planet, Iain Stewart discovers how the river Nile caused Egypt to dominate the ancient world, how the break up of a super-continent 200 million years ago shaped an energy revolution, and how wind changed the history of China and Australia.’

I am a big fan of his previous programmes for the BBC. Iain Stewart is a Lecturer in Geology in the School of Earth, Ocean and Environmental Sciences at the University of Plymouth (my old University). The new series starts on Tuesday 19th January at 21.00. Happy viewing!